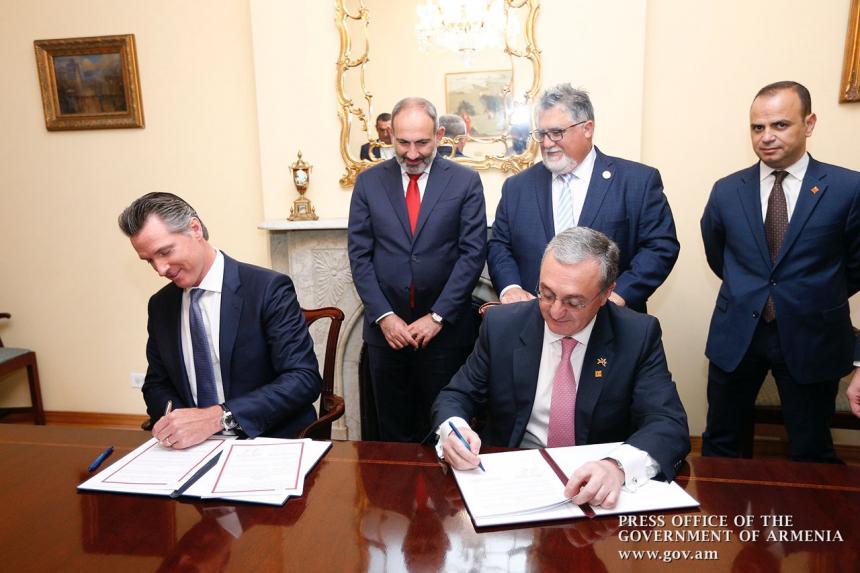 Manhattan, New York – State Senator Anthony J. Portantino accompanied Governor Gavin Newsom and Prime Minister Nikol Pashinyan today as the Governor  and Armenian Foreign Minister Zohrab Mnatsakanyan signed a historic Memorandum of Understanding (MOU) between California and Armenia.  Included in the comprehensive MOU is the formal establishment of the first California International Trade Desk in Yerevan.  Senator Portantino is proud to have introduced legislation to establish a California Trade Office in Armenia’s Capital City and to have worked with the Governor’s office on the MOU in preparation of the historic New York meeting between the Prime Minister and the Governor.   Former Glendale Mayor and current Commissioner for Diaspora Affairs, Zareh Sinanyan was also in New York for the historic MOU signing.  Sinanyan had joined Portantino earlier in the year in the Trade Office effort. Following the signing of the MOU, Senator Portantino and Governor Newsom met privately for forty minutes with Prime Minister Pashinyan to discuss increased cooperation between California and Armenia.

Through today’s agreement, California will establish a Trade and Services Desk in Armenia to be utilized by trade and tourism delegations and California’s trade representative for Europe and Eurasia to encourage trade and investment by Californian and Armenian businesses. The Trade and Services Desk will foster economic cooperation and development by assisting entrepreneurs in connecting with their counterparts to engage in various trade and commercial activities.

The Yerevan Desk is the first proposed Desk in the Governor’s international trade strategy to further economic ties between California and the world’s economies.  The Yerevan desk will be the central trade office for all of California’s trade efforts in Europe.  It firmly establishes Armenia as an important partner for California.

Governor Newsom and Foreign Minister signed the Trade Desk Memorandum of Understanding at the Armenian Mission to the United Nations in New York City.  The historic MOU agreement was consummated on September 24th.  The successful establishment of the Trade Desk caps a year-long effort by Portantino to formalize trade between California and Armenia.  The fact that Yerevan is the first California International Trade Desk to be established is a recognition of the impact of the Velvet Revolution, the importance of the California/Armenia relationship and the significant presence Diaspora Armenians have in California.  The MOU signing follows on the heels of the Prime Minister’s successful visit to Los Angeles and Glendale.

“I am ecstatic to have helped launch this historic trade opportunity between California, Armenia and Europe. To have it set up in Yerevan is of particular importance to me and proud Armenian American constitutes in the 25th Senate District.  I am very grateful to Governor Newsom for his bold vision and for making it happen. California and Armenia have so much in common and I’m hoping that this formal MOU and Trade Desk will be a vehicle to highlight it and lead to economic success for both,” commented Senator Portantino.

In addition to representing the largest Armenian American Community in the US, Senator Portantino is the Chair of the State Senate Select Committee on California Armenia Artsakh Art, Trade and Cultural Exchange.  He has long-standing positive ties to the Armenian Community.  Earlier in the year, Governor Newsom included $5 million dollars in the State Budget for the Armenian American Museum slated to be built in Glendale.  The Governor has also enjoyed a very positive relationship with the Armenian Community dating back to his time as Mayor of San Francisco.